I didn't get last Friday's XKCD until I read this post from someone who'd been in the same boat, who found out what it was: a Discovery Channel commercial that is 31 flavors of awesome. watchy watchy.

Apparently there are already people making other riffs on it. Note that since I have now discovered this meme, it must be at least half over, but I will be enjoying it for a while because I like the song so much. Another interesting bit of information from that forum thread was that the tune is from a children's song called "I Like the Flowers."

I have a strong suspicion that baby will become quite familiar with this tune in some version or another.
Posted by inkgirl at 1:54 PM No comments:

For many weeks now I've been able to feel baby moving. It's a bit odd, hard to describe (but here I go, trying). There's the flutter, faint enough that I'm not always sure it was her. On the other end of the spectrum, there's the kick or punch that can make me say "guh!" out loud, like she's doing right now to my right side as I type. She seems to be over there a lot today. It doesn't hurt, exactly, it just feels reeeeallly strange (and also tends to take me by surprise). In between are a variety of things that feel kind of wiggly or gurgly or like a popping sort of sensation. There's also a thing that started more recently that I guess might be her turning around, a sort of tight feeling of slower constant movement for several seconds.

...dih. there she goes some more. liking the right abdominal wall this evening, yes indeed.

She seems to wake up and get moving somewhat consistently around 10-10:30 pm (among other times), when I tend to be going to bed. I know this is only a small hint of the battle that shall be waged against my sleep patterns (and won, by her) starting around three months from now. .... whee. but she will be cute and worth it.
Posted by inkgirl at 9:56 PM No comments:

Seems to me, over the last several months, the congestion of my freeway commute has been less bothersome than in the past. Not gone, just a bit less. For example, on some mornings in the past, my drive north on the 110/Harbor would go bumper-to-bumper starting just before the 105 interchange. That hasn't happened in months; the slowdown is still there, but it starts after I'm already past the interchange (varying by day exactly how far past, with congestion generally peaking Wednesdays barring random accidents). My evening return seems even smoother. Slow traffic south through downtown and a while after is not entirely unknown, but feels rarer and rarer.

Then the other week my mom mentioned driving down to Orange County or somewhere during the afternoon into rush "hour," and her surprise at how non-gridlocked it was, relative to historical comparisons. So while I don't have any hard data to support my perceptions, I think it's not just me. My mom and I suspect the gas prices. 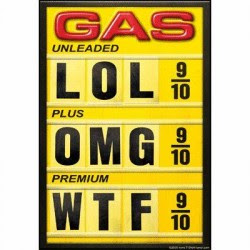 (Image lifted from this Pandagon post because it is so awesome i wanted to share)
Despite my beloved Jetta's expensive 91-octane taste, I can (so far) afford the hit and appreciate the slightly clearer path, but it's a bit unnerving to actually see my region's economic life squeezed before my very eyes. Once again I say FIE upon those who killed the Red Line electric trolleys, and wait with great impatience for the slow slow expansion of Metro Rail. (But at least they ARE expanding...)

Posted by inkgirl at 4:06 PM No comments:

12. What do you eat for breakfast?

Since I have learned, in convincing and well-documented fashion, that carbs are evil -- and (most) fat is not -- we have tended in the last several months toward eggs and bacon. It is very hard to give up bread completely though, and we haven't. In fact, we had (wheat sourdough) toast and bacon this morning, and I had milk and orange juice (separately, not mixed -- pregnancy hasn't deranged my tastebuds THAT much). M did not have orange juice because of its sugar levels. I am pregnant and OJ has folic acid.

Of course, ice cream does not have folic acid, and I have been using pregnancy to justify Haagen-Dazs dark-chocolate-covered chocolate ice cream bars once a week or so. What can I say? Baby wants ice cream.

In case of any confusion from the previous post over which bits were real:

And make no mistake, it was a good dream, a very good dream. It was just way way too short. The crying was only because I can't talk to him any more in the waking world.
Posted by inkgirl at 10:50 AM No comments:

A little while ago, maybe almost a month now, I dreamed I was standing out front of the place where we live. Grandma was there, and my parents and M, maybe a few other relatives. We were walking down the street, toward the apartments. We were going to walk down round the corner and go to see the new house being built, that would belong to M and I, somewhere near where great-aunt Bea used to live. Everyone was talking and excited about the house. As we got near the corner, Grandpa swung into step with us, saying a cheerful hello, and oh I was so happy to see him. I joyfully took his arm as I said so -- it's been so long! -- and we continued walking and talking and laughing, all going down to look at the house together.

He looked really good: as full of energy as ever I've seen him, the grandpa of my earliest memories (not that he slowed down noticeably until the last few years). Even within the dream I noticed, that I was not sure how old he looked. He wasn't young exactly, but although he appeared younger than when I'd last seen him, he was entirely himself.

And part of the reason he was so happy, I knew, was that he was happy for me. Because we're going to have a baby, you see. And I was so happy to be sharing that with him, because it's been so long. So happy. He knows.

And then as we turned the corner and came in sight of the new house, still in the wood-framing stage, I woke up.

Then I told M about it, and cried.
Posted by inkgirl at 11:44 AM No comments: